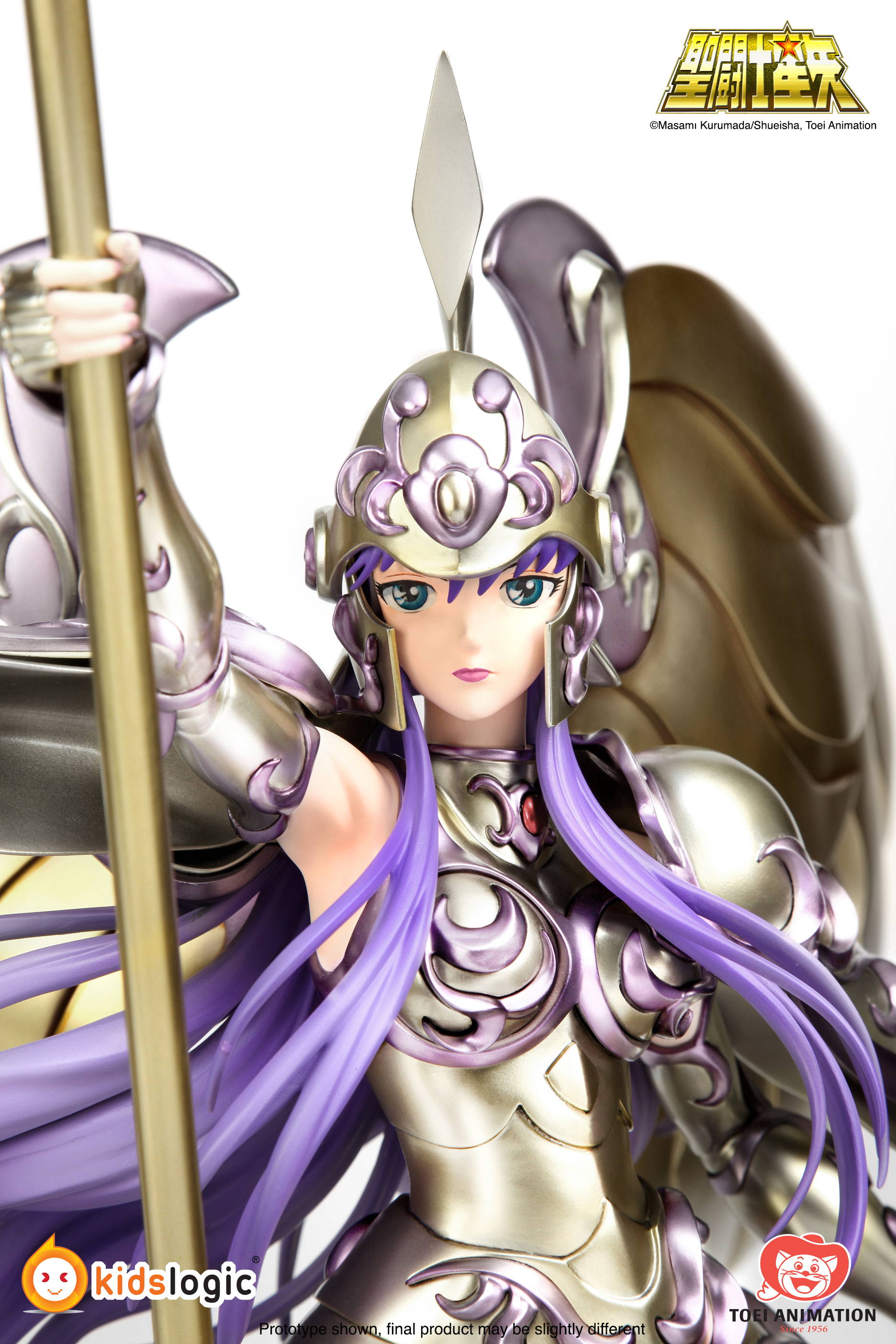 (Free Hong Kong local shipping charge)
Final shipping charge will be quoted to customers before final payment
The Estimate Released Date is for reference only. Final Release Date will be updated at this website from time to time. Release Dates are subject to change.
Subject to final approval. Prototype shown, final product may be slightly different. Product details can subject to change without further notice.

"Finally who reigns in the battlefield...
It is I, GODDESS OF THE WAR!", Armoured Athena (Saori Kido)."

Armoured Athena (Saori Kido) is the first diorama of the Saint Seiya product series, for which Kids Logic will recreate the 12 Zodiac warriors in ¼ scale (around 450 - 600 mm in height ), all with golden battle armour equipped.
Sculpting was another barricade. Introduced by  Masami Kurumada, the classic animation were super successful in the 80’s , the impacts were all done in 2D, when things come into 3D, how do we re-mold the uniqueness of Kids Logic and merge it into the Saint Seiya Series with no alternation of the original? The development team had done a 2 months research on Greek Goddess Athena, Renaissance arts and modern fashion, an hybridization of modern styling and traditional gothic implication plus the unmovable pureness of the original Athena, such complex implantation was fully concurred.
Thus with references from the modern famous silver accessories, the medieval pattern on the armour becomes more precise and aggressive in outlines and embossing in cross-sectional triangular shaping. The sole of Athena’s boots also affecting by the fashion trend from 2017. No one has done such refinements on Saint Seiya before but the outcome is harmonically synchronized. 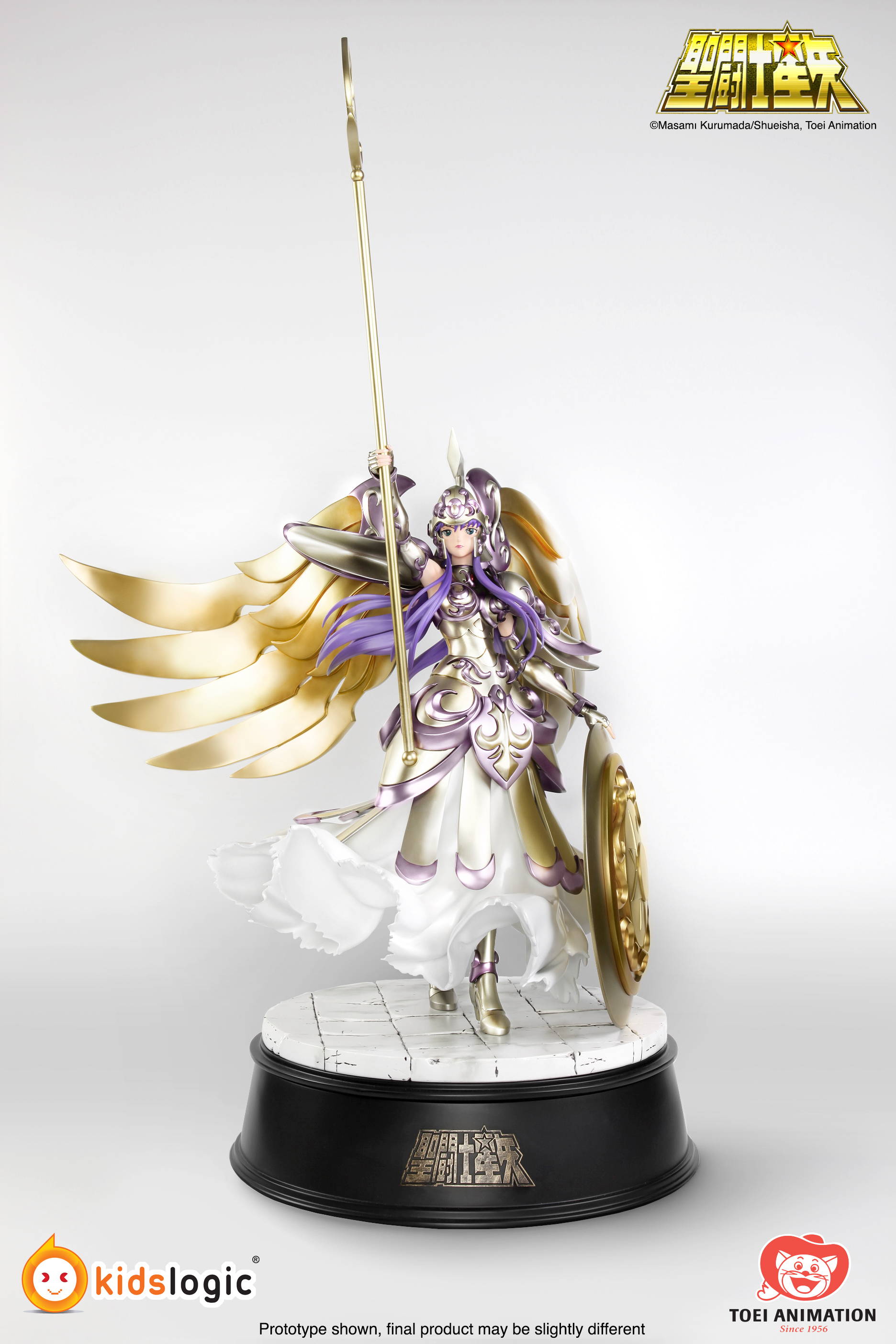 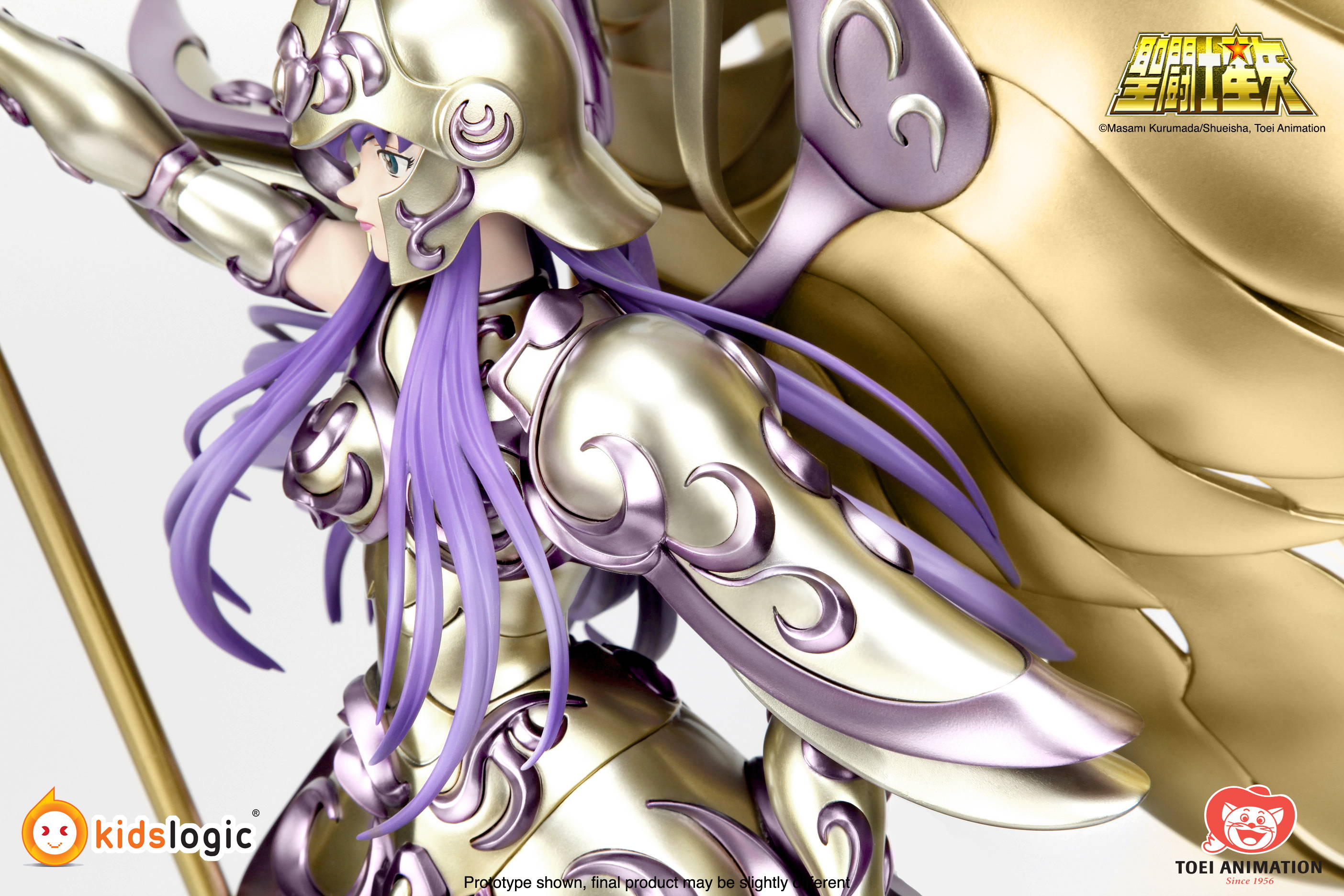 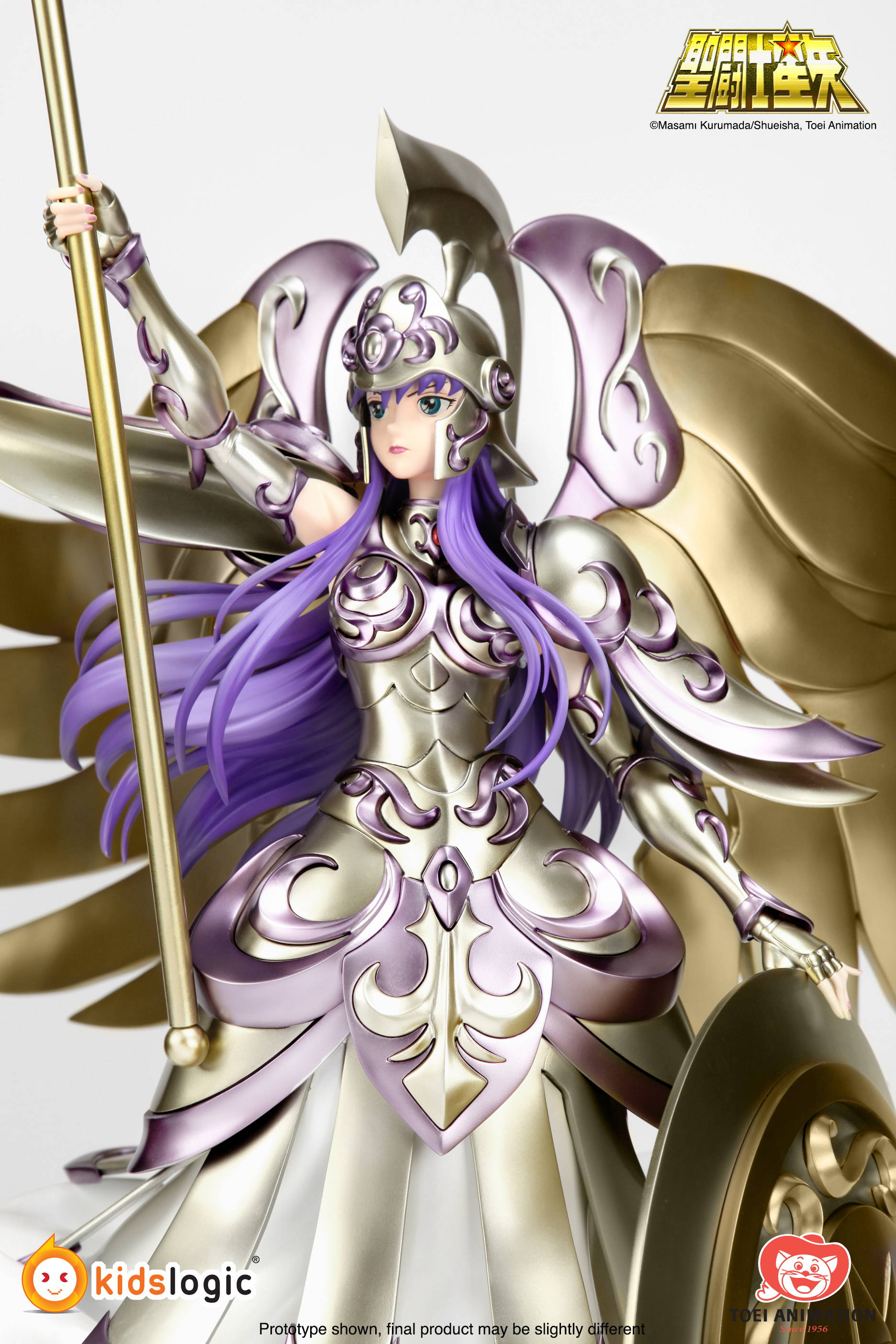 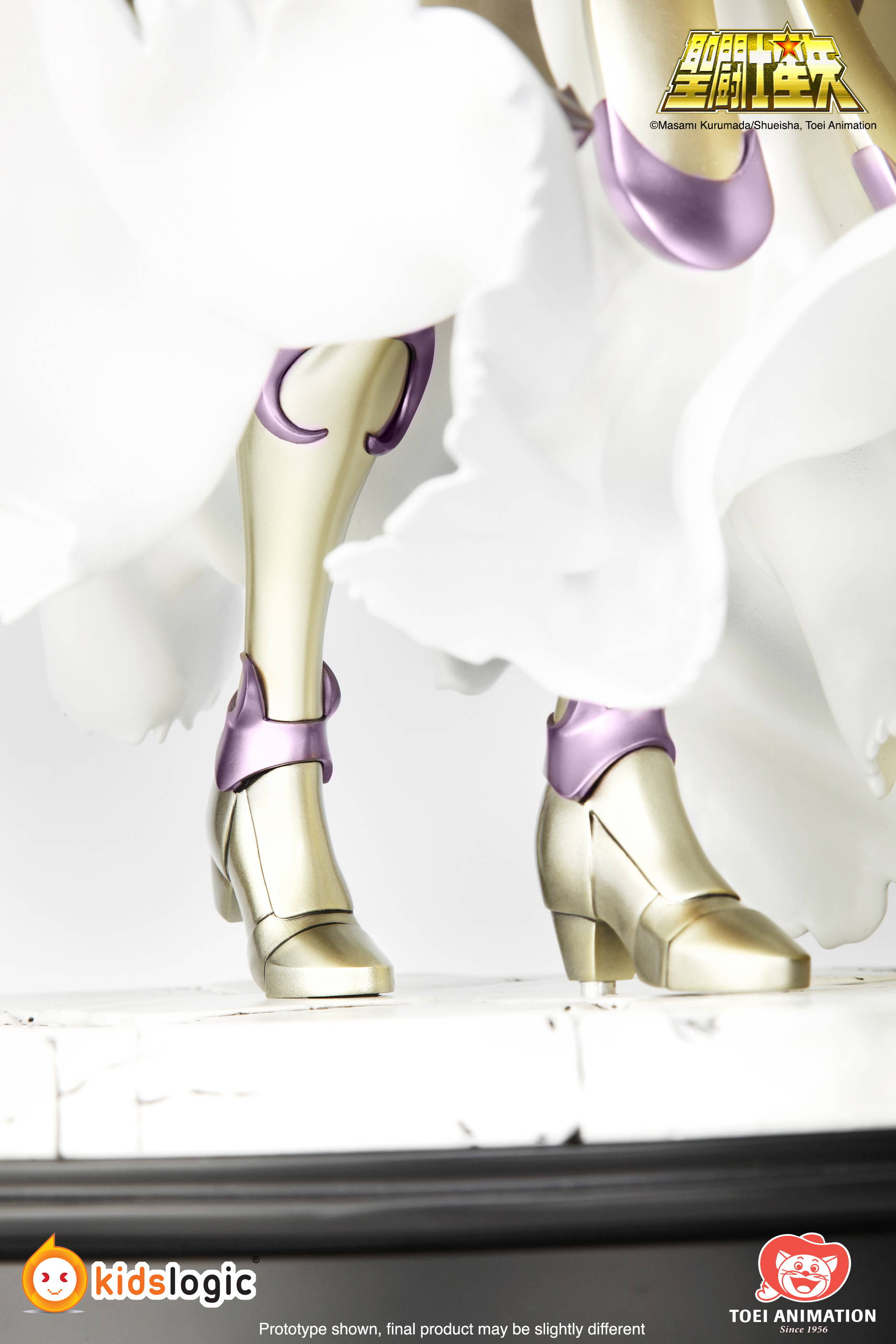 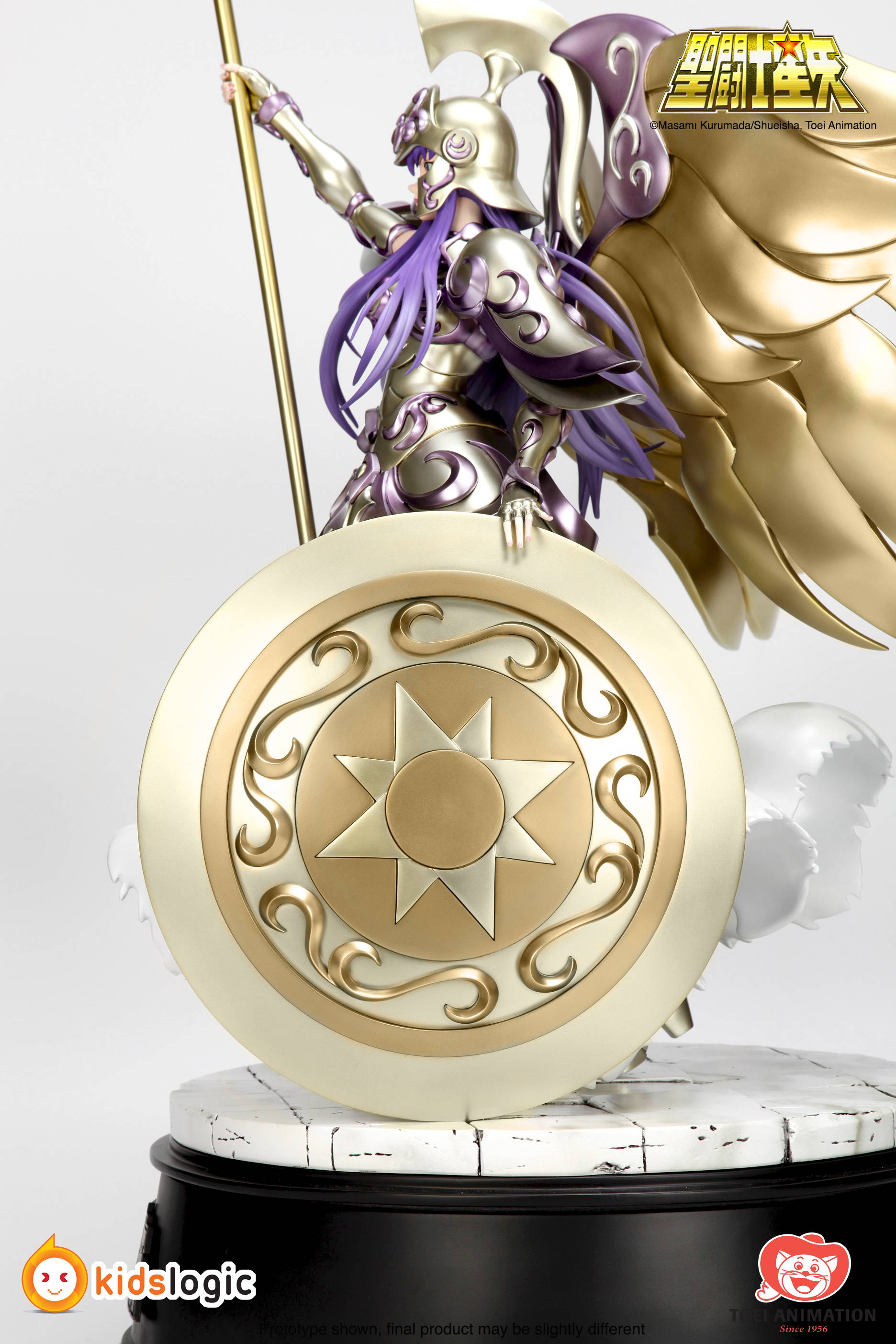 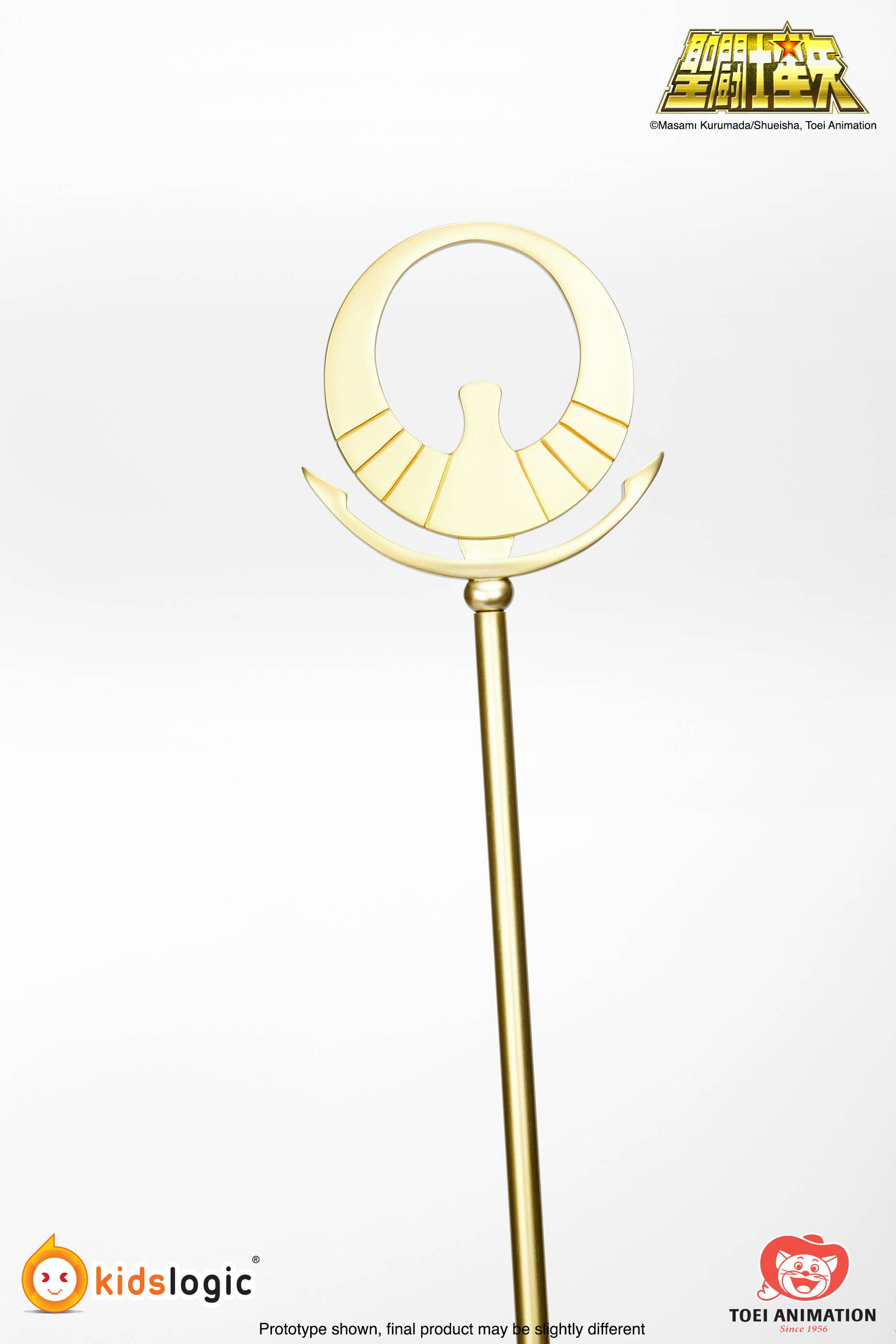 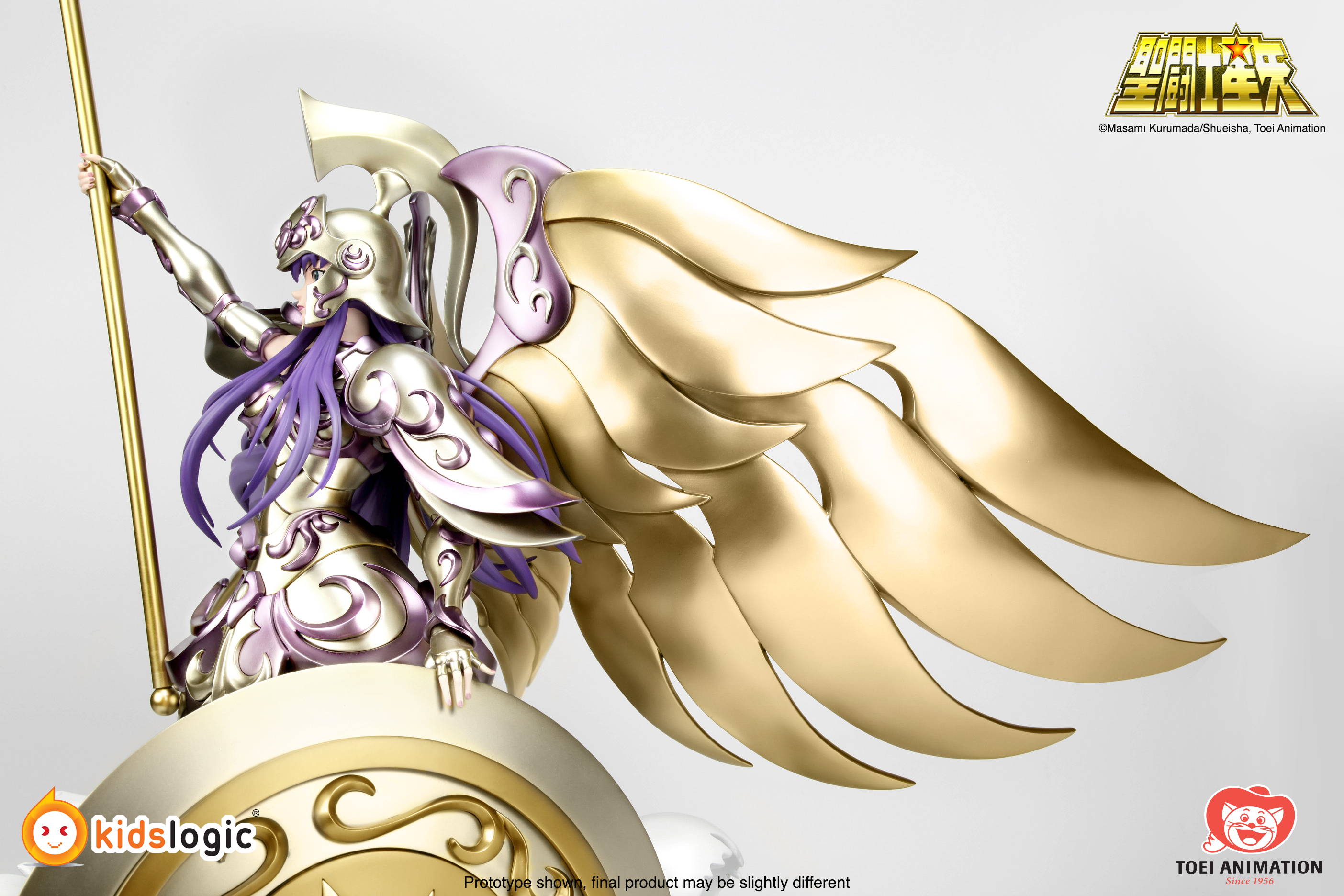 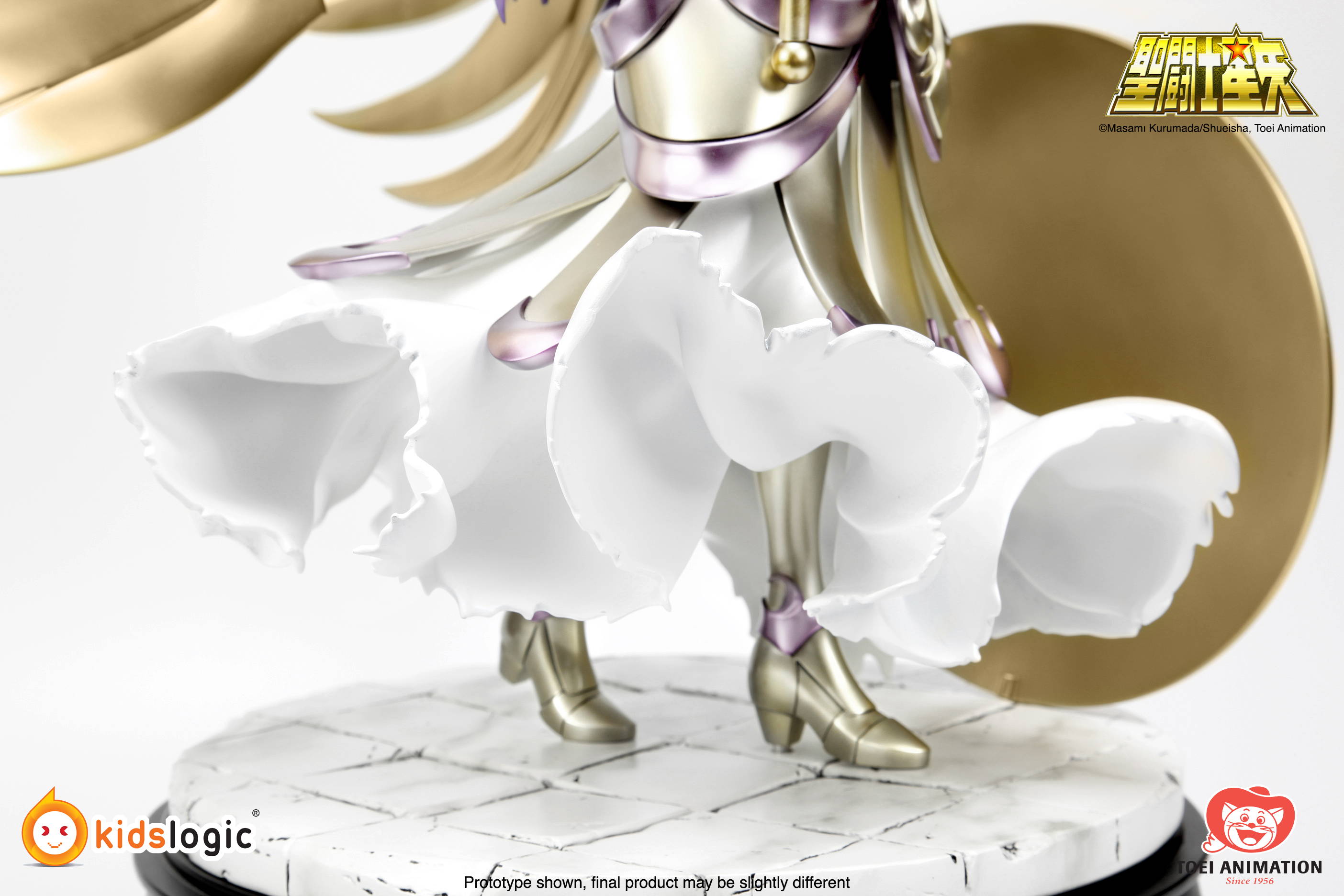 What payment options can I choose?  And what about payment schedule?

Two payment options: 1. PayPal; 2. Stripe. Generally speaking, both options accept major credit cards such as VISA, MASTER and Armerican Express. We accept USD only.
Payment schedule:
1. Deposit of USD580 has to be paid at check out.
2. The rest of USD1400 will be collected before shipment is ready. Actual shipping rate will be calculated before shipment. For example, the estimated Fedex shipping cost to North America is about USD 450 (for volumetric weight 50kg). Please expect to settle these two payments before shipment.

Which shipping agent do you use?  How much does it cost?

Can I cancel the order?  Is the deposit payment refundable?

We are sorry that all pre-orders cannot be cancelled. Deposit is not refundable. Please make up your mind before placing your order.

When should I pay the final payment?

We will email all customers a confirmation letter before shipment. Customers will be noticed about the final payment amount and confirm the shipping address with us.

Can I get an update of your production progress?

Yes, please click "UPDATES & COMMENTS" tab and check our BLOG page of the related product. We will update the production process from time to time.

Do I have to pay import tax?

Please note that our company is located in Hong Kong. All shipment will be shipped directly from Hong Kong to your address. We include shipping invoice in each shipment with actual retail price listed, and the product category will be declared as "Adult Collectibles". For certain countries, your customs may charge you for imoport tax. All import tax will be handled by customers themselves. Thanks a lot for your understanding.

How long is the warranty?

Warranty excludes damage resulting from abuse, accident, modifications or other causes that are not defects in materials and workmanship.   Warranty service for eligible repairs is available at no charge for six months from the date of product received.

What happen if my shipping address is changed after pre-order?

We will confirm the final shipping address with all customers when they settle the final payment. Please make sure your registered email is still valid so that we can reach you that time. 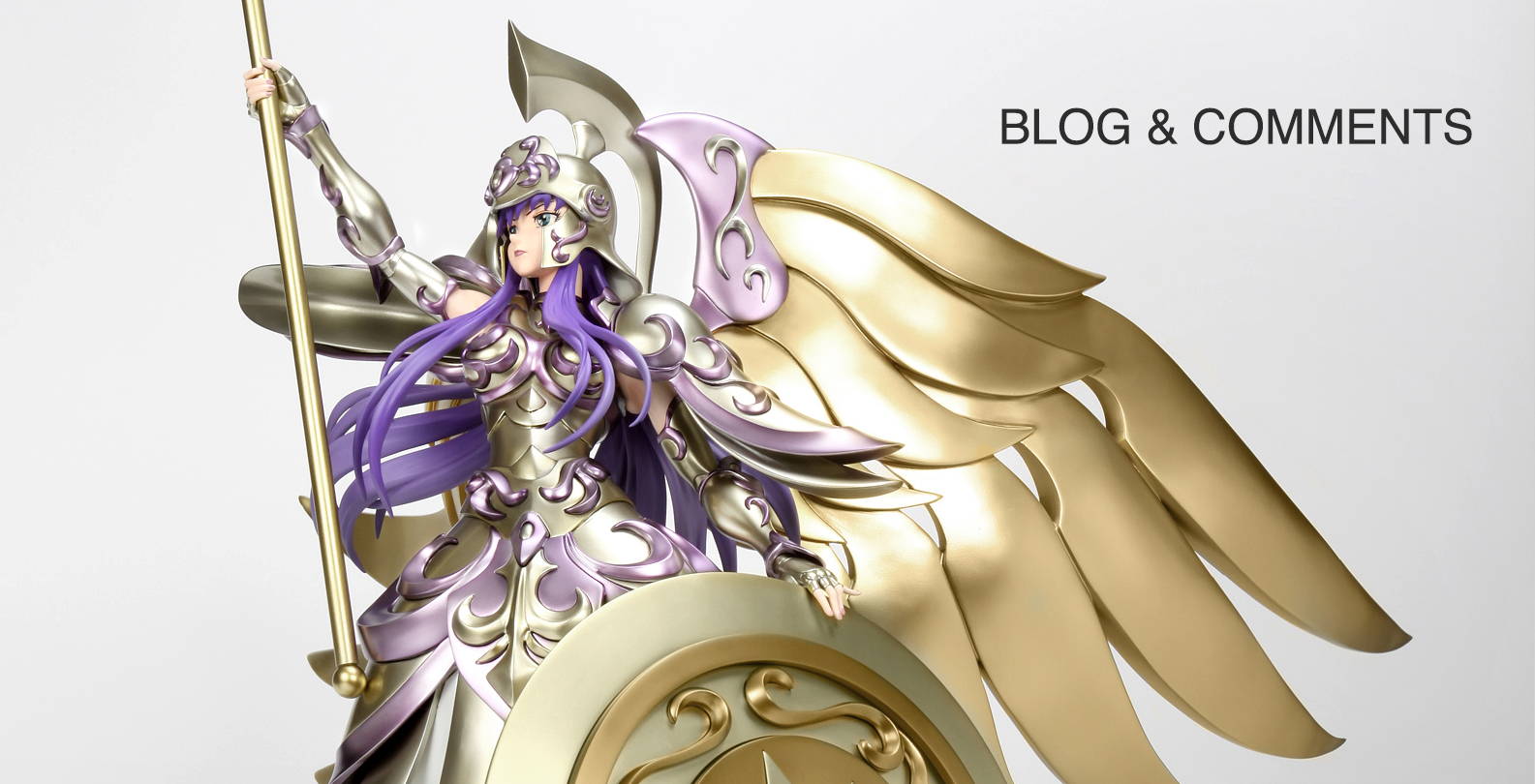 You have successfully subscribed!
0
Recently Viewed
Sorry, there are no products.
Top